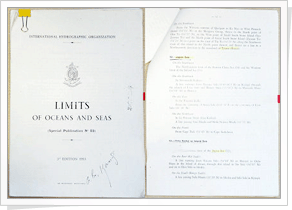 The Publication S-23 "Limits of Oceans and Seas" was published by the IHB in 1929 to define names and limits of seas and to be used for safe navigation, hydrography and oceanography.

S-23 was based on the Resolution adopted in the first International Hydrographic Conference in London in 1919, which mentioned that names and limits of seas and oceans should be defined for safe navigation. The Korean government could not participate in the Conference because it was under the Japanese Imperialism though Japan was able to do so. According to the Resolution, the name "Sea of Japan" was registered in 1923 and was adopted in 1929. After the publication of S-23, cartographers all over the world have been referring to the publication when they produce maps and charts.

Since the 1st edition of S-23, the name "Sea of Japan" has been used until the 3rd edition was published in 1953 when the Republic of Korea was not a Member State of the IHO. After the long usage of S-23, it was decided at the 11th International Hydrographic Conference in 1977 that a new edition of S-23 should be produced, and the IHB made a draft 4th edition and circulated the draft to all Member States in 1986. However, it was not adopted. 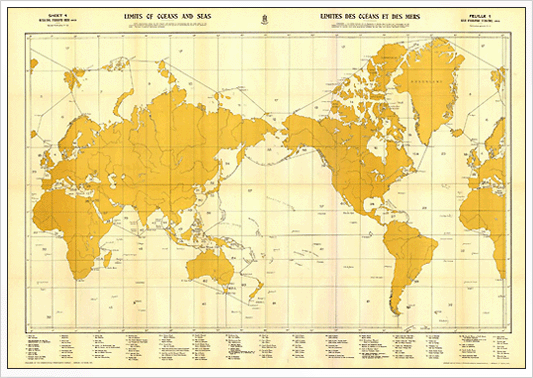 After a long preparation of a new edtion of S-23, the IHB circulated a new draft 4th edition of S-23 in August 2002. There were various changes - for instance, the name of the publication was changed from "Limits of Oceans and Seas" to "Names and Limits of Oceans and Seas", and 60 seas were given new names. However, the publication did not include the name of the sea area between Korea and Japan and left it blank.

The IHB suddenly withdrew the draft 40 days after the circulation due to various problems.