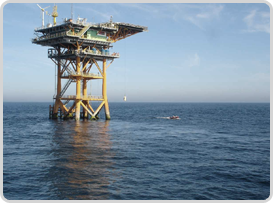 In the process of establishing a new international maritime order, new issues have been raised as objects of regulation, according to the development of science and technology. Among them are the establishment and use of maritime structures including an artificial island.

While the land is small, Korea occupies vast ocean with various oceanographic characteristics. Taking advantage of such characteristics, a variety of marine activities using artificial islands and structures are expected including not only the expansion of economic activity in territorial sea, but also scientific space utilization in the nearby sea.

Ieodo is under our maritime jurisdiction because it is within proclamation waters of peace line declaring sovereignty on the adjacent sea in 1952.In addition, it is a part of a continental shelf fourth Block of our submarine KONOCs in Maritime Mineral Resource Development Act enacted in 1970. When establishing an Exclusive Economic Zone (EEZ) based on the principle of median line, waters of Ieodo will be within the EEZ of Korea.

Regardless of the purposes, economic or not, coastal countries maintain the exclusive rights to set up the artificial islands of any purposes including marine city and maritime airport, and facilities and structures for the exploration, development, conservation, management and economic development of natural resource, and the economic purpose of that Act in the EEZ.

When the upper waters of continental shelf has a legal status as open sea, it can be interpreted that exclusive rights of coastal countries on the maritime structures can only be acknowledged for the exploration of continental shelf and development of natural resource.

When maritime structures are set up in the EEZ and continental shelf, coastal countries have the basic obligation where they should consider rights of other countries, announce the establishment of such maritime structures, maintain permanent means of warning on its existence, and completely withdraw abandoned or obsolete structures.

Since Ieodo is a submerged rock, however, which does not protrude above the sea level both in low and high tides, any country cannot insist their maritime jurisdiction just because of its existence.

KHOA will do its best to contribute to prevention of ocean disasters in northwest pacific as well as the coast around Korean Peninsular by researching the sea around Ieodo as a advance base for investigating the global climate change including global warming and super typhoon. That is the way to be steady ower of the sea around Ieodo.